Office Crèche – A Boon for Mothers at Work

About 24% of India’s workforce consists of women. And, out of which only 5% constitutes the top layer which is less than half of the global average, i.e. 20%. The reason for this dip is the massive fall and drawback of women from the organization structure due to the various family obligations – raising a family is one of the major reasons. Sitting on the thought can clarify the huge absence of day-care centres or office crèches at workplaces, which keeps more than a million of women from achieving their career goals.

In a typical Indian society, a woman (no matter how educated and skilled she is), has to wear multiple hats in her life. From a wife to a daughter, to a home-maker to a business executive; there are tons of roles that a woman has to cater to. Not only are these roles challenging, but the pressure to manage home and work is surmounting. Moreover, when women choose their career over their families, i.e. children, it is considered a social stigma. And, this the reason why there has been a rise in the number of day care centres, nurseries, and office crèches in top cities of the country.

Corporate offices in Gurgaon, Delhi, Mumbai, Pune, Bangalore, and Hyderabad have already seen a good response from IT and MNC companies. Mainly, because they have their headquarters situated in these cities and also have to maintain standards to match their global rapport. Companies become more people-centric and providing friendly ambience for their employees, and thus creating opportunities to reduce the burden on their women workforce. The best part of these office crèches is the diminishing proximity of children and their mothers. Working moms can now be more productive at work and also leave aside worries to take care of their kids.

While independent child-care centres can be expensive and a little complex to run, office crèches are located within the premises. But, this, in turn, is a good way to boost employee morale and organizational retention. This helps in preventing women workers from leaving their children at daycare centres. Modern Indian society also sees a rising number of single moms who aren’t sure about the administration of these daycare centres, thus making office crèches the best choice for new moms.

(A view of office creche at Airtel India office.)

There are few smaller startups and enterprises who have initiated the establishment of services for the privilege of children less than six years of age with platforms like the Forum of Creche and Childhood Services. But, a strong need for a higher level of establishments likes MNCs and corporate in bigger cities like Gurgaon, New Delhi, Mumbai, Kolkata, etc. still exists. It is here where there is a larger chunk of women workforce, who can bring out the need for a mandate in their companies.

India sees a large portion of people from the middle-income strata working in private companies and it is where a high female participation is also seen. There is also the case of nuclear families in metro cities where the absence of elderly or other family members makes it difficult for working mothers to leave their kids behind. As a result, the need for crèches at workplaces becomes more significant.

The rise of the middle class, higher female participation in the workforce, and the emergence of nuclear families where both the parents are working have led to the amplification of this sector of office crèches and child-care centres, which is mostly unorganized. Some of these offer services from few hours to an entire day.

On the positive side, several big brands and organization having their offices in IT parks have initiated the move. Take Bharti Airtel for example, which included a crèche in their design when their team moved to their Gurgaon office in 2010. Out of their 3000 strong workforces, 600 were women. And, the crèche worked effectively to protect, provide, and take care of children from 6 months to 3 years of age. However, the cost of participation was bored equally by the employee and the employer, the strategy was effectual in retaining high ROI in human investments.

Similarly, HCL incorporated an office crèche in their office in 2012 but outsourced the entire daycare services to 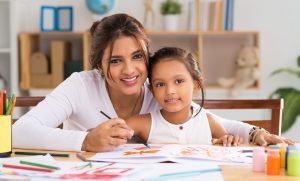 (Office creche is a great add-on for mothers looking to spend quality time with their children.)

professionals. Few others who followed the same route were Accenture, GE, Pepsico, Flipkart Godrej, Genpact and more. The crèches in all these companies helped them with better retention, better word of mouth, and even attracted better talent. Obviously, the happy workforce yielded even better work output. Going ahead on this path, companies like IKEA have even announced that they will be opening crèches in all their 25 planned stores by 2025 so that their women workforce enjoys their work.

Office crèches in organizations generally take up about 1500-2500 sq.ft. but the challenge will be on SMEs and startups who are looking for a furnished office space. Money-wise the investment isn’t big and by looking at the fraction of the real estate it requires to build a crèche, it is totally workable. This Mother’s Day let us give some way and let the strong-willed, gutsy, and smart working moms come ahead. If you want to bring this positive change in your organization, share the information or you can sign a pledge too!

Office space with   No Brokerage

Also premium offices at  No or little Brokerage